Ylva Pettersson, of the European Societal Security Research Group discusses this question, and presents the research project ANVIL, in a blog post for the Swedish Institute for International Affairs.

New threats to societal security can be described as border-crossing, as they hit several sectors of society and cannot be controlled or stopped by only one state. Thus, they demand cooperation across national and sectoral borders. Crisis management and civil protection is coordinated within the EU in order to contribute to the existing national capabilities. How can EU best coordinate these efforts – within the frames of existing national systems?

ANVIL is an EU co-funded research project that looks at how civil security systems function in different countries and regions. The project brings together 12 organisations from 11 different countries in Europe, including members of the Societal Security Research Group.

Actorness and effectiveness in international disaster relief: The European Union and United States in comparative perspective

In a new article in International Relations (27(3) 356-374), Erik Brattberg and Mark Rhinard of the Societal Security research group examines the role of the European Union (EU) and United States as actors in international disaster relief. They take the analysis of ‘actorness’ one step further than normal by assessing the extent to which different aspects of EU and US actorness led to effectiveness in actual outcomes. In doing so, they make two contributions. First, they provide a rare comparison between EU and US foreign policy actorness, shedding light on the actor capability of each bloc in the area of international disaster relief. Second, they specify the relationship between actorness and effectiveness, a relationship which is too often assumed rather than explored. Using previous research of EU and US actorness as a starting point, Brattberg and Rhinard link four aspects of actorness to effectiveness and assess the resulting hypotheses using the case of the 2010 Haiti earthquake. The authors find support for their proposed links between actorness and effectiveness, although it is stated that further research is needed before robust conclusions can be drawn.

The European Union as crisis manager: patterns and prospects

The European Policy Centre and the Swedish Civil Contingencies Agency are pleased to invite you to a Policy Dialogue on Thursday 21 November 2013, on The European Union as crisis manager: patterns and prospects.

A subtle shift in thinking about the EU’s role as a manager of crises is taking place, casting light not just on the EU’s role in crises abroad, but also in emergencies, disasters and infrastructure breakdowns at home. At the same time, a dynamic process of reorganising and strengthening the EU’s capacities and tools related to different types of crises is underway. This is happening across the institutions and was partially prompted by the Lisbon Treaty, which encourages joined-up crisis management, and by actual crises hitting the Union, including the Libyan and Syrian uprisings, pandemics and extreme weather events. The implications of these shifts both in thinking and practice are profound: citizens’ expectations of coordinated action are high, while new forms of crises are on the horizon.

Against this background, this Policy Dialogue will shed light on these issues and discuss the future of the EU as a transboundary crisis manager. Speakers include Kristalina Georgieva, European Commissioner for International Cooperation, Humanitarian Aid and Crisis Response, Deputy Secretary-General Maciej Popowski, European External Action Service (tbc), Erik Windmar, Member of Cecilia Malmström Cabinet, Directorate General for Home Affairs of the European Commission, and Antonio Missiroli, Director of the European Union Institute for Security Studies.

The event will be opened by Rosa Balfour, Senior Policy Analyst, European Policy Centre, and Helena Lindberg, Director-General of the Swedish Civil Contingencies Agency. Arjen Boin, Magnus Ekengren and Mark Rhinard, authors of the recently published book ‘The European Union as Crisis Manager’, will also take part in the debate.

Arjen Boin, together with Madalina Busuioc and Martijn Groenleer, has a new article titled “Building European Union Capacity to Manage Transboundary crises: Network or Lead-Agency Model?” coming up in Regulation and Governance.

This article explores the growing role of the European Union (EU) in managing transboundary crises. More specifically, it reflects on the different ways in which the expanding contours of the EU’s emerging crisis capacity can be organized.

“News biases relief in favor of certain disaster types and regions: for every person killed in a volcano disaster, 40,000 people must die in a drought to reach the same probability of media coverage. Similarly, it requires 40 times as many killed in an African disaster to achieve the same expected media coverage as for a disaster in Eastern Europe of similar type and magnitude.”

This, and other findings on media coverage of natural disasters are presented in the article “NEWS DROUGHTS, NEWS FLOODS, AND U.S. DISASTER RELIEF” by Thomas Eisensee and David Strömberg.

The article has also recieved some attention on the world politics blog The Duck of Minerva.

The European Societal Security Research Group is very proud to announce the publication of a new book by Arjen Boin, Magnus Ekengren and Mark Rhinard: The European Union as Crisis Manager – Patterns and Prospects. 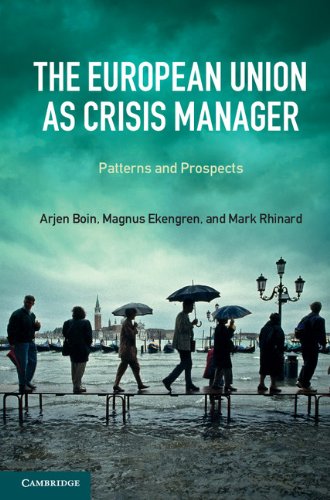 The European Union is increasingly being asked to manage crises inside and outside the Union. From terrorist attacks to financial crises, and natural disasters to international conflicts, many crises today generate pressures to collaborate across geographical and functional boundaries. What capacities does the EU have to manage such crises? Why and how have these capacities evolved? How do they work and are they effective? This book offers an holistic perspective on EU crisis management. It defines the crisis concept broadly and examines EU capacities across policy sectors, institutions and agencies. The authors describe the full range of EU crisis management capacities that can be used for internal and external crises. Using an institutionalization perspective, they explain how these different capacities evolved and have become institutionalized. This highly accessible volume illuminates a rarely examined and increasingly important area of European cooperation.

Find the book at Amazon.com or from the publisher Cambridge University Press.

Stockholm University invites applications for one PhD position in the Department of Economic History, with a focus on international relations. The position is oriented towards research on international cooperation on complex security challenges, with a conception of challenges including (but not limited to) such issues as pandemics, terrorism, organized crime, energy supply, food shortages and infrastructure breakdowns. A focus on the European Union’s approach to such threats is welcome, and a historical element to research is possible. The PhD position will be part of an international research project directed by Associate Professor Mark Rhinard together with researchers from Utrecht University, Utrikespolitiska institutet andFörsvarshögskolan.

The position is for four years, with an expecting starting date between 1 December 2012 and 1 January 2013.

After the terror attacks of 11 September 2001, the European Union (EU) staked its claim as an important international player in the fight against global terrorism. The EU encouraged new initiatives at the United Nations and devoted newfound attention to aid and assistance programs to third states. The EU’s ambitions and heightened activity prompts a number of questions about rhetoric versus action and offers a useful test case for assessing the quality of the EU’s ‘actorness’. This article applies the actorness concept to shed light on the EU’s behaviour in global counter-terrorism activities. It draws together existing insights on actorness into an analytical framework containing four sets of variables – context, coherence, capability and consistency – and applies the framework to evidence gathered on the EU’s international and third country role in countering terrorism. Our results show that the actorness approach sheds considerable light on the EU’s international behaviour in global counter-terrorism and suggests the EU has some way to go before becoming a full actor in this area.

In a new article published in Journal of Contingencies and Crisis Management entitled “Coordinating for Contingencies: Taking Stock of Post-9/11 Homeland Security Reforms”, Erik Brattberg assesses the U.S. homeland security reforms after 9/11. He concluders that although significant progress has been made, several obstacles with regard to coordination remains

Over a decade after September 11, American citizens are still asking themselves: ‘how much safer are we today?’ This question is also pertinent for scholars seeking to understand the post-September 11 homeland security reforms. This paper, drawing on the public administration literature and using Don Kettl’s ‘contingent coordination’ framework, sets out to discuss how well these efforts have addressed the central coordination challenges posed by homeland security. In doing so, it makes two contributions: one methodological (e.g., operationalizing the contingent coordination framework) and one empirical (e.g., assessing the effectiveness of post-9/11 homeland security reforms). The paper concludes with an overall assessment of how to find ways to further strengthen the capacity of the US homeland security system. Article is available here